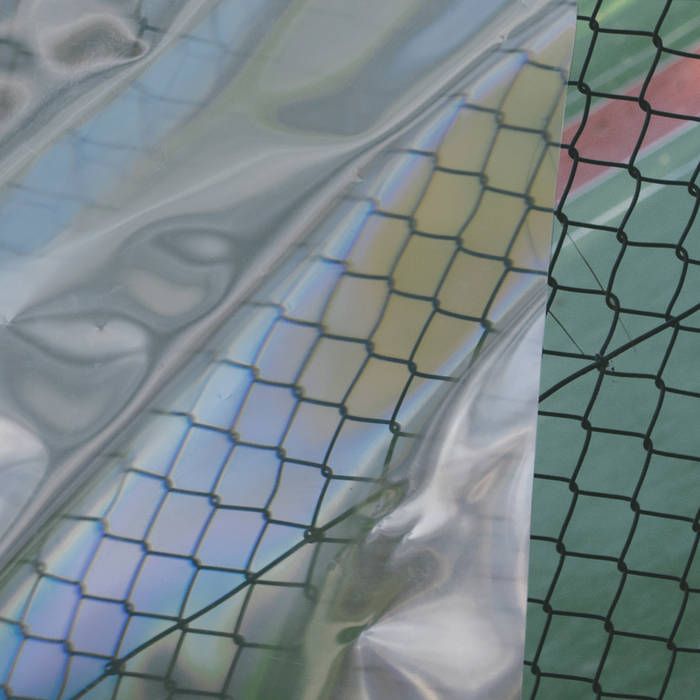 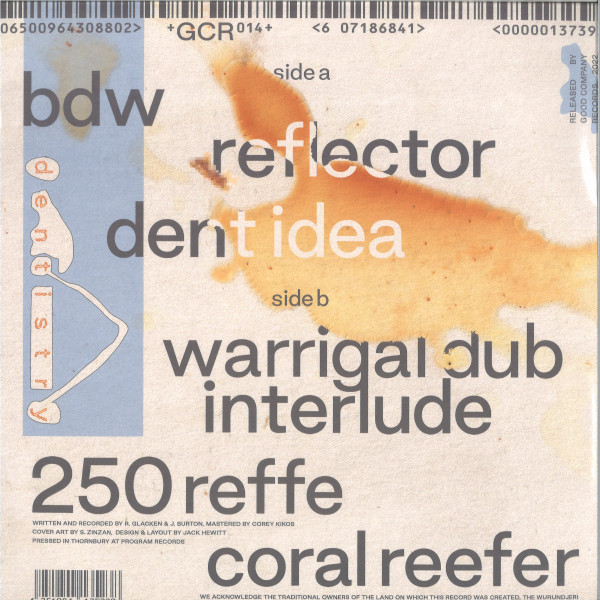 Dentistry is the dual energies of Rory Glacken and Jack Burton, Boorloo originals now living in Naarm. The pair have previously released an EP, “Ribbons,” on their own Deep Water label, and a track on its local showcase comp “Greenhouse Vol. I” at the end of 2021. This transmission is their debut full length offering, channeled through hometown beacon Good Company Records.

“LP1” was created in unusual conditions between September and December of 2020, when the duo’s shared Northcote studio became a site of remote collaboration. One person would start working on a track and leave the session open for the other, with no overlap of physical space shared. Responding to an invitation from GCR to make a record, the initial impulse was to write dance music. But what dance floor were these incorporeal partners writing for?

The album takes a spectral approach to the dance space, wrapping up air in a strata of textural tech, pulsing dub house and fractal illbience. Drawing on dub production techniques, "LP1" combines the structure of an ambient record with intricate percussive elements. Results are both atmospheric and material, abstract and palpable: a synthesis which expresses sonic relations of surface and depth, with the correlating mirage of light and shadow.

At times tinkering methodically and others in mercurial lurch, there is an immediacy to this album that stems from the way it was produced, using a mixing desk and outboard gear to rich and living effect. When we listen, we commune with the artists in the heat of working out of an otherworldly space, and feel every tweak and and turn. “LP1” is a current which carries the substance of process in communicable form. Intuitive and moving, breathing, dancing.

Spaces And Places (A……

In anticipation of Kerri Chandler’s forthcoming album Spaces and Places, his first in 14 years, that sees the New Jersey legend celebrating club and soundsystem culture by recording, writing and performing a track in twenty-two of the worlds most distinguished nightclubs, Kaoz Theory drop the third in a series of vinyl album samplers.

Paul Hardcastle is marking the 30th anniversary of his 1985 anti-war hit "19" with a celebratory vinyl release that collects 14 versions of the career-defining single. 19: The 30th Anniversary Mixes includes remastered versions of the original mixes: the full length version (from the original 12-inch), the popular Destruction Mix and The Final Story version - the latter actually being the 'requiem' element which is the second part of that remix. Also, issued for the first time commercially is Hardcastle's demo of "19" that he recorded in his mom's front room! These originals are combined with a number of contemporary, creative reworkings (mostly by Hardcastle himself), some of which date from 2010 when he revisited the track to create variations such as History Keeps Repeating Itself and Welcome to Hell. The Inner Changes Mix is actually Victims of War (Pt 1) from 2010 and the Cryogenic Freeze Mix dates from 2012 when 19 Below Zero was issued.In April 1985 Paul Hardcastle’s seminal track "19" entered the UK top 40 singles chart at #4. A week later it went to #1 where it remained for 5 consecutive weeks. Not even Duran Duran, on the back of the blockbuster movie A View To A Kill, could shift it! "19" was subsequently released worldwide, achieving overall sales in excess of 6,000,000 copies and hitting the #1 spot in 13 different countries as well as #1 on the US dance charts and #15 on the main Billboard Hot 100.Paul Hardcastle said: “The message of 19 is as poignant today as it is was 30 years ago. Soldiers are coming back from the frontline of battle and are not being supported on their return to Civvy Street. Statistics recently showed more soldiers are committing suicide than died in battle."